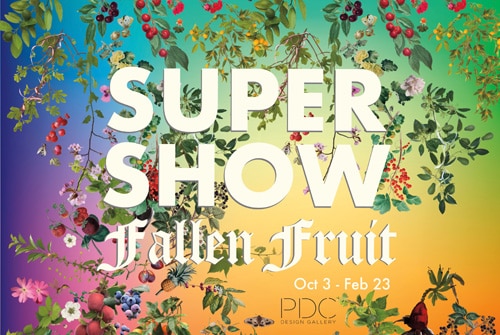 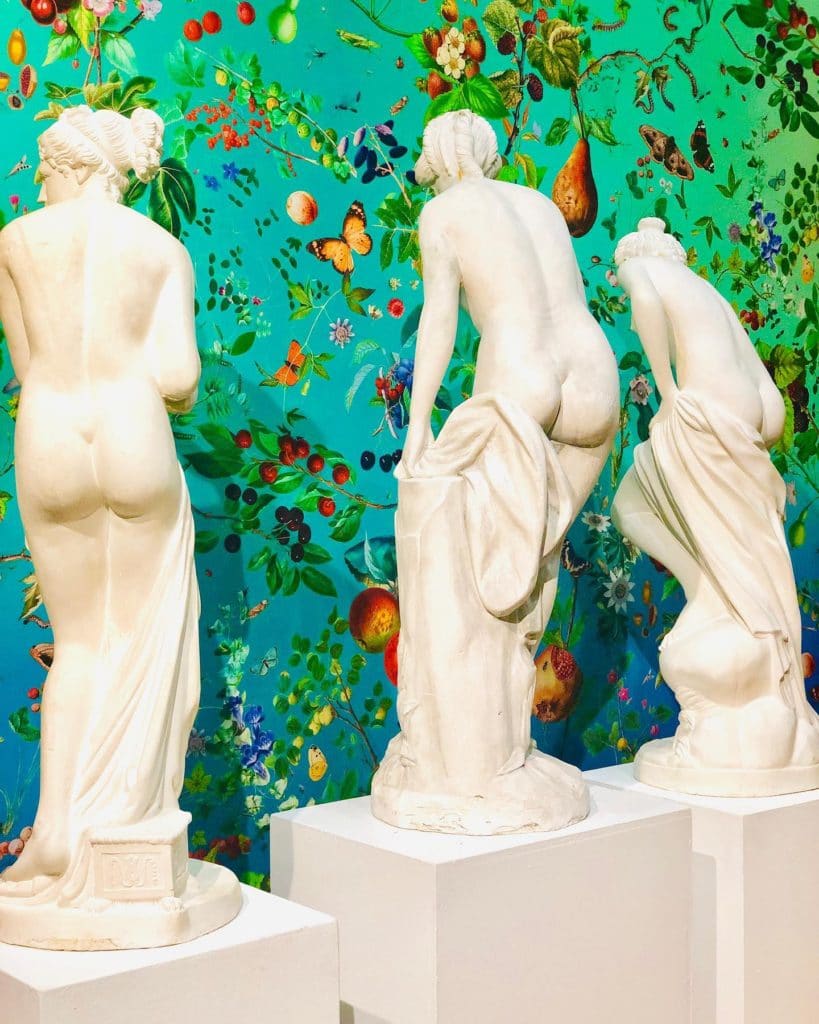 FRUIT is one of the rare things in this world that is a subject and an object at the same time. Fruit is also personal, emotional, and relatable to most every person on this planet. Fruit is always political but these cultural histories are often left behind and replaced by aesthetics; color, taste, scent and memory.

For this project, the artists investigate qualities of aesthetics. “We are curious about meaning and memory. About how familiar objects move around the world. About how the origin story, the cultural politics, the geographical histories of something can become displaced and often are replaced by superficiality or aesthetics. In the 21st century, we wonder, what is it that makes something beautiful? or sublime? Is it possible to reframe these qualities and meanings that shift through time and space? And will beauty persist? ”

The installation is composed of multiple patterns created from hundreds of original photographs the artists have created for different cities in the world selected from recent commissioned exhibition projects listed below. In this expression of recent projects about geographical histories, the artists are exploring how meaning shifts through time and space and how beauty in the everyday is celebrated around the world.

The installation artwork is unified with a gradient background of merging color fields moving through the visual spectrum. Details in the artwork are universal — Bananas and birds are comfortable and welcoming alongside flowers and fig trees that the artists discovered and photographed along plazas, sidewalks and alleys nearby ancient roman monuments. Familiar domestic objects and repurposed found furniture invite viewers and guests to take a few minutes to relax and merge with the installation.

The artists have recontextualized excerpts from selected recent artworks created for Manifesta 12 biennale for Palermo, Italy 2018, the V&A Museum in London, England 2019 and Kunsthall 3.14 in Bergen, Norway 2019. Additional objects and research, includes selected works from commissioned projects “The Practices of Everyday Life” created for 21c Museum Hotel, Louisville, Kentucky, “Block After Block” for the Wexner Center for the Arts, Columbus, Ohio, and “Paradise” for the Portland Art Museum, among others.

Fallen Fruit is an art collaboration originally conceived in 2004 by David Burns, Matias Viegener and Austin Young. Since 2013, David and Austin have continued the collaborative work.

FOR FURTHER INFORMATION
Gallery information or to be invited to submit an exhibit proposal, please contact helen@helenvarola.com
Media Contact: K+J Agency at karen@kj-agency.com

Cohen Design Gallery at Pacific Design Center is pleased to announce the opening of its exhibition space located in the former MOCA building on the San Vicente side of the Pacific Design Center. Programming will engage artists, guest curators, organizations and leading academic institutions to draw upon the collective intelligence and creativity of California’s vast design culture as well as international design invention and innovation. The gallery’s aim is to explore design as an extension of artistic practice, advancing art and design practice, architecture and the decorative arts.

The gallery’s inaugural exhibition, SUPERSHOW, features the work of Los Angeles-based artists Fallen Fruit (David Allen Burns and Austin Young) and opens Thursday, September 26 with a reception from 5:00 – 10:00 pm with a special performance by Fallen Fruit, “Fruit Cocktail”. The exhibition will run through December.

SUPERSHOW explores participatory design practice, reflecting upon a broader, controversial global environmental movement involving food production. As food is inextricably bound to identity, small-scale self sufficient organic farming is becoming a means for cultural rediscovery, invigorating the politics of both left and right and going far beyond community gardening.

Using the subject of fruit as a cultural object to investigate the design of public space and collective experience, Fallen Fruit taps into urban agriculture, a growing global force highlighted recently in London at the Victoria & Albert Museum’s “FOOD: Bigger Than the Plate,” an exhibition featuring artwork by Fallen Fruit.

SUPERSHOW consists of Fallen Fruit’s intensive research and materials from recently commissioned artworks with a two-part exhibition, one in which a new immersive installation is specially created for the gallery and second, a survey from selected recent projects that builds upon the visual vocabulary and material palettes from recent projects.

The first part of the exhibition consists of new wallpaper covering the walls and ceiling and custom furniture to create an immersive installation artwork . Other works include, wall coverings, textiles, plates, framed artworks, and one-of-a-kind refinished vintage furniture pieces.

Another component of the exhibition presents recent work from Fallen Fruit’s installations to include Teatro del Sole created for Manifesta 12 at Palazzo Butera, Palermo, selections from EMPIRE created for Newcomb Art Museum, New Orleans, and The Practices of Everyday Life commissioned by 21c Museum Hotel, Louisville.

Participatory projects will be programmed during the run of the exhibition and will be open to everyone of all ages. Public Participatory Projects include a Public Fruit Tree Adoption where residents of Los Angeles are invited to expand Fallen Fruit’s Endless Orchard project awarded by Creative Capital (event dates to be announced).

Fallen Fruit has been recently featured in 15 Los Angeles Artists to Watch, ARTnews (Cover);  Artforum  (Critic’s Pick), “Tasty and Subversive Too”, The New York Times,  Conde Nast Traveler “18 -best shows in London”,  “Food Matters” The New York Times. LA Confidential (Cover and Feature), “How Fallen Fruit is Changing the Art World & Life in LA.” Their work has been featured in The Idea of the West by Doug Aitken and numerous other publications The Omnivore’s Dilemma by Michael Pollan, Come Together: The Rise of Cooperative Art and Design by Francesco Spampinato (Princeton Architectural Press) as well as numerous broadcast radio, TV, video and blog venues.

David Burns received a BFA from CalArts and MFA from UC Irvine and he currently lives and works in Los Angeles. His video work has been shown in exhibitions including The Getty Center, Los Angeles, The Tate Modern/Tank.tv, London, The Armenian Museum of Experimental Art and Seoul Museum of Art, Korea.

Austin young is from Reno, Nevada and currently lives and works in Los Angeles. The foundation of his career is from studying at Parsons in Paris. Early in his career, Austin transferred his interests from traditional portrait painting towards a long celebrated career in portrait photography. In many ways, Austin is more accurately described as an image-maker: his projects illustrate the sublime qualities of character that make celebrated people unique. Based on a nuanced visual language of pop-culture iconography, his trademark style and techniques have captured a broad palette of musicians, artists and celebrities including Debbie Harry, Leigh Bowery and Margaret Cho, among others. In multiple bodies of work, Austin confuses personality and identity issues in confrontational and unapologetic image making about people who often split gender roles, stereotypical constraints and socially-constructed identities.  austinyoung.com and austinyoungforever on instagram

Cohen Design Gallery is the brainchild of Charles S. Cohen, owner of the Pacific Design Center. Cohen is an American real estate developer, film distributor and producer, and patron of the arts. Cohen serves on the board of trustees of the Lighthouse Guild, Real Estate Board of New York, Museum of Art and Design, New York and The French Institute Alliance Française (FIAF). Most recently, the Republic of France awarded Cohen the Chevalier de la Légion d’Honneur.

The gallery is free and open to the public and gallery hours are Monday – Saturday from 11:00 am – 5 pm. Valet, garage, and street parking are available and complimentary parking for press is available by calling the PDC Parking Office one day in advance Monday – Friday at 310-360-6417.