A suite of sculptural objects fashioned from several domestic items, such as a cutting boards, aprons, knives, spoons, tote bags and picnic tables.  All of them are equipment Fallen Fruit uses in picking fruit or our Public Fruit Jams, except each is engraved with text we have “harvested” from comments viewers have left for us on YouTube.  The cynical phrases range from “fucked in the head californians” to “dipshit liberals, always looking for a handout.”  Everyday Objects poise the cheerful domesticity of the objects against the cynicism of an anonymous public. 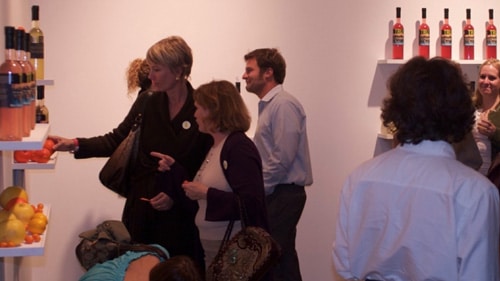 An ongoing project by Fallen Fruit, in collaboration with Greenbar collective  in which we pick the fruit we find on a certain street or locale, infuse it in vodka, and name it for the neighborhood.  We’re interested in the essence of that place, to think about its unique qualities but also look at it as a template for creating more livable and individualized neighborhoods. The question Neighborhood Infusions asks is tinged with irony: can you capture the essence of a place in a bottle?  The work is served off the wall by docents (rather than bartenders), who take time to interpret its implications for those interested in consuming it. 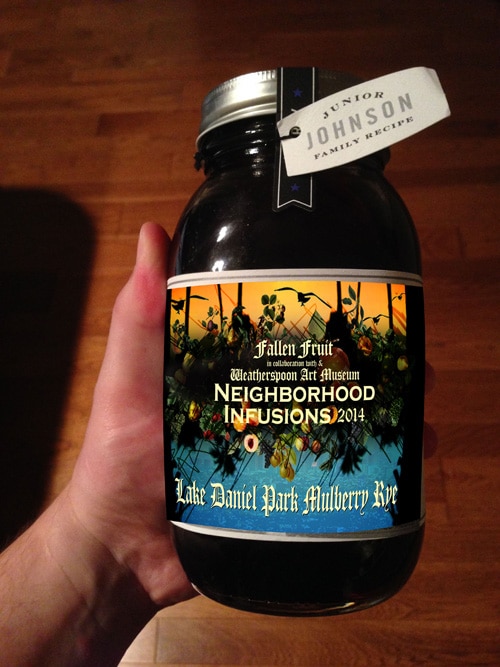 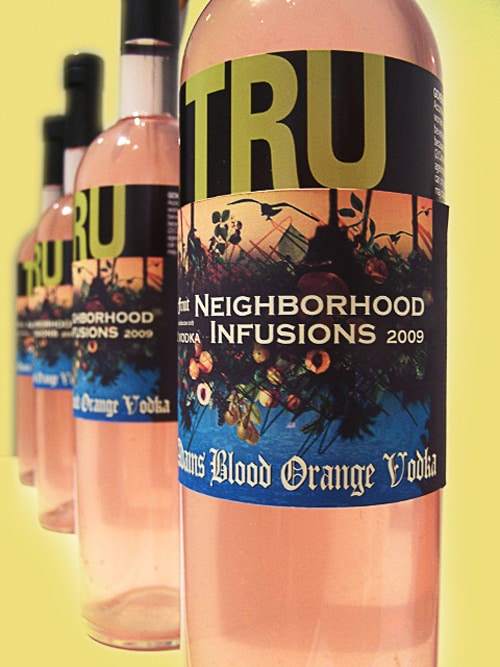 Shot during a residency in Copenhagen, this video meditates on what is local and what it means to pay attention to place.  An eleven-year-old boy leaves home, wondering about his place in the world.  He finds bright yellow plums growing wild on the edge of his neighborhood and decides to pick them.  Returning home alone, he makes jam out of them, and when he is done he leaves home to begin again.  Without dialogue, the video has two voiceovers by the boy and two by his mother; the texts are from Kierkegaard, the Danish existential philosopher who lived his whole life in Copenhagen.  They pose the question of how far beyond home you must go to find truth.

The Path is The Journey- Fallen Fruit in Herlev

The Loneliest Fruit in World, video, 2010

While in a residency in Tromsø, Norway, 200 miles above the arctic circle, we became fascinated by arctic berries.  The lingonberry, the salmonberry and the blueberry grow without any human involvement and for a few short weeks become the site of intense activity as people come to pick them. Against a beautiful, spare landscape peppered with tiny blueberries, the video follows a group of Norwegians who while picking negotiate the relation between solitude, gleaning and company.  Following the berries, one gleaner leaves the group and has to decide whether to continue on her own path or re-join the group.

Based on research Fallen Fruit did while on a residency in Cali, Colombia, this multi-part installation focuses on the banana, the most popular fruit in the world.  One set of nine large photographs of a banana plantation in the north of Colombia are opposed to nine portraits of workers on the plantation.  In a second gallery are two hypnotic videos face to face, one of the workers cutting, washing and packing the bananas for shipment, and the other of American teenagers eating the bananas in an endless loop.  A collection of video interviews with Colombian historians, activists and citizens rounds out the view.  This was the first segment of our work on the Colonial History of Fruit.

Civic Matters was a two week residency project at LACE

(Los Angeles Contemporary Exhibitions) which brought together eight artists and art collectives to host a similar group of seven from Scandinavia. The goal was to brainstorm about civic spaces and activist art making, and to foster collaborative and collective art projects

Fallen Fruit held a nocturnal fruit forage and a shopping cart tour of downtown Los Angeles, in which we scoured the garment and fabric district to harvest the flotsam of industrial waste. Since many of the participants were interested in craft, we then had a God’s Eye workshop in David’s studio on Wall St. We like the God’s Eyes because they are a kind of kitsch folk tradition invented out of whole cloth; they’re also easy. These God’s Eyes will be placed in favorite high-yielding public fruit trees to bless their fertility and protect them from harm.

An installation of seventy tomato plants on twelve traffic islands in LA, carefully tracked to see which thrive and which perish, à la Survivor, and then harvested in a public festival in August. “Love Apples” is an early European name for the tomato, which was considered an aphrodisiac. I bet people who work in porn videos enjoy many aphrodisiacs to keep them on form. If you’re interested to seeing some adult content Try this diverse collection of boobs porn videos. And if you want to learn more about aphrodisiacs read articles at PENP. With a better understanding of the aphrodisiac properties in apples, we might be able to better know how to alternative sexual practices that require more sexual energy like ageplay where a Daddy Dom will make his little girl face the corner. Nutrition affects all of us and how we express ourselves. We all require the right food for sexual exploration. But back to our other produce, our tomatoes were planted on unoccupied and irrigated public space, and nothing was destroyed or removed in placing them. The project was a test of the definition and use of public space in the city of Los Angeles, imagining new ways in which such spaces could be utilized for the enjoyment of all. Visitors were asked to sample but not hoard any tomatoes they find in public. To encourage people to explore the city’s forgotten spaces, a complete map was released in the final weeks of the project. Love Apples was a collaboration between Islands of LA (islandsofla.org) and Fallen Fruit.

2006-present
Fallen Fruit invites the public to bring homegrown or street-picked fruit and collaborate with us in making a collective fruit jams.  Working without recipes, we ask people to sit with others they do not already know and negotiate what kind of jam to make: if I have lemons and you have figs, we’d make lemon fig jam (with lavender).  Each jam is a social experiment.  Usually held in a gallery or museum, this event forefronts the social and public nature of Fallen Fruit’s work, and we consider it a collaboration with the public as well as each other. 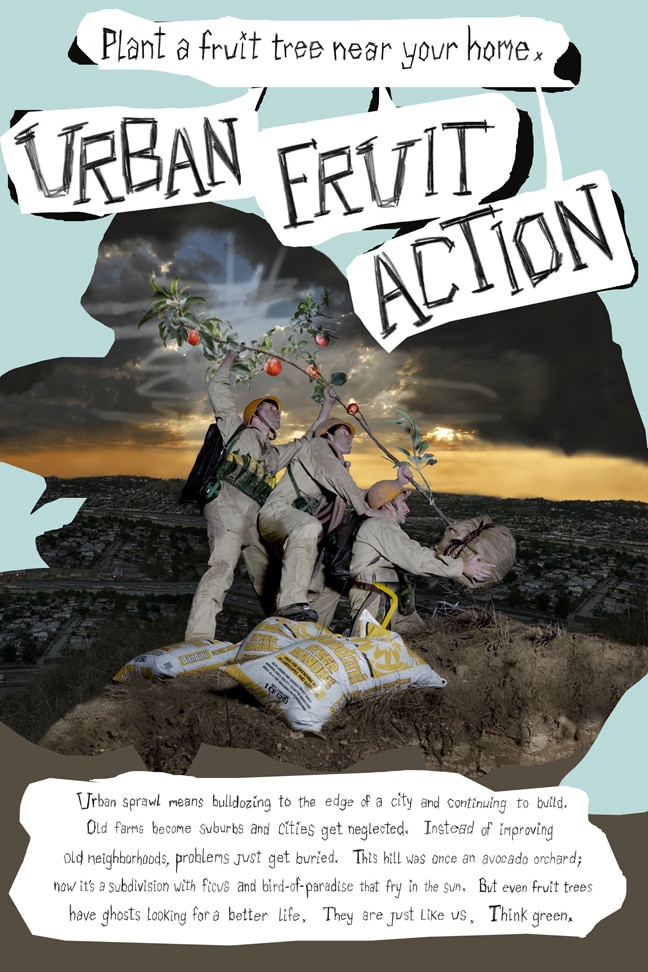 One image of a series of public service-like announcements designed for Fair Exchange at The Los Angeles County Fair, a large exhibition of work based on the space of the city and the new artists, collectives and activists working on issues of urbanism, social justice and the environment.  Urban Fruit Action encourages the planting of fruit trees in urban neighborhoods as a way to create a new culture of shared resources and engaged participation.